This year the team West Coast were little bit faster and stronger with a lot of first year Oldboys players. Skåne Oldboys still better looking team started well but after some injuries, had to struggle with a short bench. Congratulations to the West Coast Masters for a well played tournament.
Well done all of you! 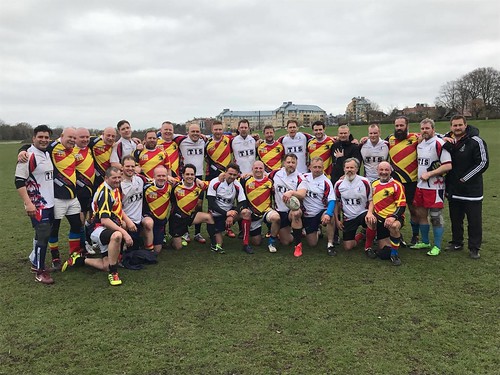 Proudly presents VALHALLA TROPHY 2017. Invitations will be sent out to our friends in Denmark, Norway and Sweden. The trophy holders West Coast Masters are ready to defend their title.

The games will start at 11:00 and will be played at Limhamnsfältet.

EVRA included this Tournament in the Events Calendar 2016 and supported the organisation, as well as its promotion.

As the guest players (Emanuel Sandu -Manu, Sigismund Feilhaufer – Sigi) and the official from Romania , Dracula Old Boys – Romanian Rugby Federation, Bucharest,  Ana-Irina Dincu, came to Trelleborg not only to join the Tournament, but also to “gather some experience” aiming to organize one veteran tournament in their country in 2107 and so join EVRA and European Veteran Rugby activities.

The Romanians have intention also to candidate for the organisation of Georg Holek Cup in the near future.

Excellent IRB referee Andrew Steven, Englishman from Netherlands, had no problems to conduct the tournament games in the same spirit. This was for him the first ever experience with rugby veterans and by the end of the tournament his comment was: “Wonderful, you veterans just got one more supporter . . .”

On Saturday evening all the participants had been surprised when the host Club and the Fijian Tomasi Tamanivalu offered “Lovo” – traditional Polynesain food prepared by cooking with the hot stones, covered with palm leaves and the soil . . . The third Halftime organised on Sunday in the Municipality Hall ended with the presentation – awarding of all teams. The announcement of 14th Georg Holek Cup had been made – it will be held in Germany (Rottweil) in June 2017.

Apart from presenting Swedish souvenirs by the Organiser to all teams, EVRA awarded with special made EU Series plagues the Pingvin RFC as the Organisers, Club Founder Wolfgang Österling, the Club Founder and the “oldest events participant” (84), the Town Sports Council representative, that supported the whole Event.

The representatives of Pingvin RFC and Skåne Old Boys informed about the common intention to organize a Veteran Tournament in 2017, in Skåne Region (South of Sweden).

George Holek Cup is an international oldies cup played 12 times before in different countries all over Europe. The tournament is named after and played in honor of George (Jiří) Holek.

This years Georg Holek Cup will be hosted by Pingvin Rugby Club in Trelleborg, Sweden.

Click on the following link to read about the tournament and how to apply;

The SOBR, Skåne Oldboys Rugby, will go on tour to Romania 3 June to 6 June. The team will go to Bucharest and meet teams from Romania, Ukraine and Moldavia. A new tour kit is being designed as we speak.

We are looking forward for the Romanian tour 2016!

We are Skåne Oldboys Rugby
Skåne Old Boys is a mixture of older (senior sounds much better) players from the Skåne region of Southern Sweden. The first meeting of these senior players was back in 2008 in the EMG. The team then consisted mainly of young men around the age of 35. The tournament culminated in a brutal, hard fought final against Sivi Levi(Grey Loins) of Ukraine which we managed to defeat after 40 long, hard minutes. This gave us the drive we needed to form Skåne Old Boys in 2012, and the rest is history……we have been touring ever since.

Four clubs from the Skåne region began socialising on a regular basis and the result was this dream team. The team has a wide range of playing skills and intellectual ability, due mainly to the fact that we are a mixture of guys from Skåne, Denmark, Romania, England, Scotland and Wales. The Skåne region which has dominated Swedish rugby primarily through Pingvin RC from Trelleborg and Malmö RC, contributed to the stable core of these experienced and talented players. Helsingborg RC and Lugi RFC added to this melting pot to create a well balanced mix of flavours which is Skåne OBR. Despite the fact that our active rugby careers have been officially over for some years, we are now ready for rugby adventure on the high seas. This is of course ideal as long as our wives don’t find out.

Skåne OBR has set the philosophical guidelines for the game we play, both on the field and off the field. The emphasis tends of course to the social side of rugby. We concentrate on having a team spirit which is second to none, and that philosophy extends to our opponents. We have a genuine interest in participating in the whole concept that rugby offers. We see ourselves not only as a team, but as a squad consisting of individuals who all contribute in their own way, as ambassadors of our viking ancestors….well some of us anyway.

We have steadily risen in stature over the years coming a close second in the Georg Holek Cup (GHC) in Perugia and the GHC in Konstanz. However our two greatest achievements to date are lifting the Jeff Butterfield trophy at the recent Farnham Old Boys Rugby Festival 2015 and managing to get everyone to meet up at the airport in Copenhagen at the same time!

Skåne OBR is of course all about the camaraderie, the experience of travelling to new and exciting countries, the opportunity to play against and socialise with new teams, the beer and the wine, and at the end of a hard day, a win every now again.

So now we come to 2016 and what this year will bring. 2015 has been a year of great highs cavernous lows. The 2015 RWC was the most successful ever but let us not forget the tragic events that took place in Paris in January and November of 2015.

In 2016 Skåne OBR will have the honour of hosting the GHC in Trelleborg on the southern tip of Sweden. The tournament will be held over three days from the 25th to 27th August 2016 and we hope to have a full quota of twelve teams by this time. The invitation can be seen by clicking on the following link
http://pingvin.nu/en/georg-holek-cup-2016/.
Mark Stacey – Captain Skåne Oldboys Rugby

This article is copied from EVRAs homepage. Go vist it and see some pictures also, click here.

Skåne Old Boys, the selection of veteran players from south of Sweden are the new holders of EVRA European Festival most precious award – Jeff Butterfield Trophy.

From the very start of the Festival games with their approach to veteran rugby – having fun playing the Game, respecting the opponents, with “high social performance” – it was clear who will “win” the Trophy – to keep it for the next two years in their clubhouse.

When Farnham RUFC was bidding to organize European Festival by the end of 2013, Paul Brooker, the Festival Director “promised” perfect weather and playing conditions and a lot of Fun for European veterans.
And, he had right – all three “conditions” had been fulfilled, together with the fourth one – adequate and perfect refereeing by the Surrey RFU referees led by veteran John Robertson, better known as J.R.

On Thursday evening at the Welcome Drink the Festival was officially opened by the Mayor of Town Farnham, Lady Pat Frost  and Geoff Robins, Farnham RUFC Chairman.

The opening game on Friday has been played by Over 50 ´s of the hosting club – Escargots (The Snails) and EUROPE 20XV EVRA Select Team, with players from 10 European countries.

The games to follow for the veterans from 12 nations had been played on three excellent grassed pitches of Farnham Sports & Leisure Park, openned by Lord Sebastian Coe in 2012 before the London Olympic Games. The matches had been played all three days because of the fact that many teams visited RWC matches, with the highlight game New Zealand vs. Argentina at Wembley Stadium, played in front of 89.713 spectators, what is the “world record” in visiting one rugby match.

The Festival Gala Dinner on Saturday was also part of 40th anniversary celebrations of Farnham RUFC, one of the “youngest” English clubs. During the Gala Dinner the Organizers of 2017 EVRA European Festival had been officially announced – the next EU Veteran Rugby “Meeting” will be in Poland (September 14 – 18th) in Siedlce, town with great rugby tradition . . .

Special EVRA 2015 awards were presented the same evening to the Club Chairman, Geoff Robins, as well as to Geoff Bond for the Rugby Football Union, that supported this great veteran rugby event, to be held for the first time in England after 1985, when the 4th Air New Zealand World Golden Oldies Rugby Festival had been organized in London.
Regular Festival Awarding Ceremony took place in big Festival marque on Sunday, where the usual Festival organizers and EVRA awards had been given to all participating teams.

“The More the Merrier Award” went to Galicia Old Boys (La Corunha, Spain)
“I would Walk 500 Miles” Award went to Old Boys Hungary
The Oldest Festival Player, this time two gentlemen had deserved this prize
José Redondo and John Wilson (each born in 1943), both playing for
Lousa RC Veteranos (Lousa, Portugal)
“The first Festival Try” Award went to Andrew Mortimore, the Prop of Escargots Over 50 ´s team and . . .

Special thanks went to the numerous volunteers of Franham RUFC without whose engagement and wiliness to help in any situation, this great Festival would not be possible. Thank you Farnham RUFC in the name of European veterans.

A update about our tour to MCS EVRA 2015 will shortly be presented. Stay tuned and enjoy Rugby World Cup 2015 in meanwhile.

Our new tour kit for the tournament EVRA 2015 has arrived!

Thanks to all sponsors!